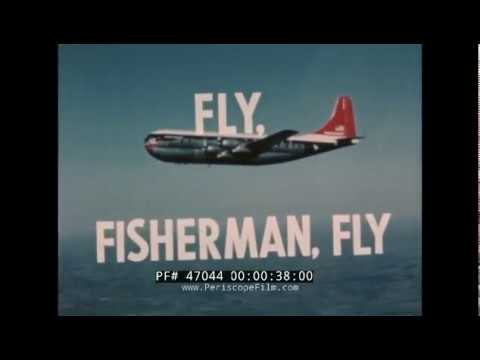 This early 1950s color film encouraging using airplanes to travel to favorite fishing spots was presented as a public service by United Aircraft Corporation and a presentation of The World Outdoors, Inc. There are also multiple verbal reminders to buy US Saving Bonds by narrator Peter Roberts. Shown are a 1948 Northwest Airlines logo and a Boeing 377-10-30 Stratocruiser (:26-1:00). A man pulls up a large fish into a fishing boat in a Canadian river (1:01-1:28). A man fishes from shore in Hawaii and another stands in a river in Alaska (1:58-2:24). An air taxi drops off salmon fisherman on Lake Sebago in Maine at the Migis Lodge. The plane picks them in the morning and take them to a landing where a guide with a canoe waits. They choose flies. Two fly fish as the guide paddles. They both catch salmon before boarding the air taxi directly from the canoe, which returns them to the dock, where they hold up their catch (2:52-6:50). In Yankton, South Dakota, fisherman catch catfish from the banks of the James River. They hand-pull in a 69-pound catfish (6:52-8:47). Passengers disembark from a plane to go to Rainbow Springs State Park in Florida, where a signs says “Home of the World’s Largest Bass.” Underwater video is shown of different sizes of bass. A fisherman casts from a slow-moving motorized rowboat. Footage of the underwater catch is shown as the fish attempts to get off the line. Additional underwater footage is shown (8:49-12:49). The plane next flies to British Columbia for speckled trout fishing at the La Barriere Fish & Game Club. The fisherman stand on rocks jutting out at the foot of the waterfall rapids to cast their lines. The final catch of 12 trout is displayed (12:51-16:05). The plane next travels to Hayward, Wisconsin to fish for muskellunge on Teal Lake. The three fish from a very slow moving motorized rowboat. The fish struggles and leaps out of the water. They display their catch (16:06-19:53). Passengers disembark from a Canadian Pacific airplane at Kamloops Airport in British Columbia, Canada. The fishermen, currently dressed in suits, carry their fishing poles in leather containers. They get into a Little River Fishing Lodge courtesy car. Now dressed in fishing clothes, they travel in motorized rowboats to the fishing area. The giant rainbow trout put up a fight, some leaping out of the water. The fish are then cooked over a campfire, and vegetables are cooked in a cast-iron pan. The men enjoy their fresh meal. They pose with the fish they didn’t eat. They board the Canadian Pacific airplane, which taxis down the runway (19:55-26:45). A Lockheed L-1649 Constellation plane takes off (27:07-27:23).