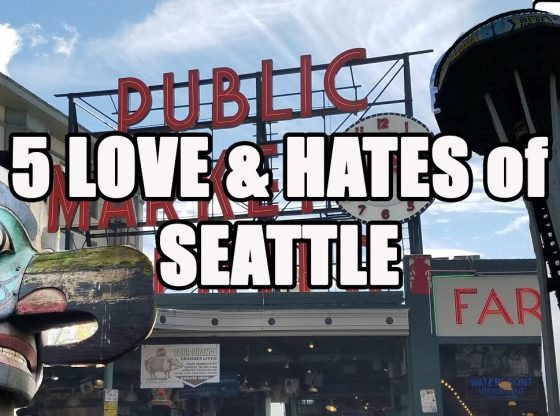 Seattle is a city full of great restaurants, bars, museums, architecture and more. Whether you want to while the day away at Pike Place Market watching the fish throwers or grabbing a drink by Pioneer Square or checking out the Freemont Troll. There are a lot of things to love about Seattle, however there are things you won’t love about Seattle. This is the 5 Things You Will Love & Hate about Visiting Seattle, Washington.
Filmed in Seattle, WA
Copyright Mark Wolters 2018

5 Must Eats of Seattle

Our Gear:
Sony Alpha 6000: Our favorite camera for vlogging. One of the best selling cameras of all time and its not too expensive.
https://amzn.to/2N0BStX

Osprey Meridian Carry-on Size Travel Backpack: This is THE backpack that all of the Wolters World family use. It fits in the overhead compartment, gives you a great day pack and has an awesome warranty. We always travel with one.
https://amzn.to/2NEyhTC

Duafire Travel Adapter: helps you plug into most countries plugs around the world.
https://amzn.to/2ujfUdR

Travel Strip: One plug for your normal device, four USB plugs as well, it saves a lot of trouble and outlets when you travel.
https://amzn.to/2NEuu8S

Backup Battery Pack: Essential for travelers wanting to have a backup batter charge for their phones, cameras, and devices.
https://amzn.to/2NFpT67

Hey There Fellow Travelers! Thank you for watching our honest travel vlogs from all over this wonderful world. If you would like to get in contact with us please follow us & send us a message via our social media channels below. Also, if you like our travel videos please feel free to share them with other fellow travelers.

SEATTLE TRAVEL GUIDE from a Local! Top Things to See, Eat & Do in Seattle
Things To Do In Seattle!