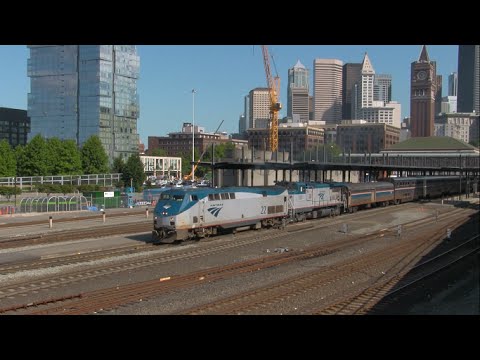 For finishing up my catch up from the summer, here is a video of trains in and around Kings Street Station in Seattle. We had arrived on a Cascade train the night before, and made it a point to try and see some trains in the city before our Empire Builder departed later this evening. We were successful in seeing some of the Amtrak and BNSF action in the area. First up we saw a Northbound BNSF freight heading for the station passing a Coast Starlight waiting to depart. Shortly after the BNSF had cleared the Amtrak Coast Starlight got a highball and headed south with a P32-8 second out, and private cars on the rear. Later on that day we caught a southbound Amtrak Cascades train with the new train set passing a stopped intermodal. In the afternoon, we waited on a station platform before boarding the Empire Builder, here we saw two trains, first a mixed manifest led by some leased GEVOs, and second was a ballast train operating in “push pull” fashion. We then had to head back inside to prepare to board the Empire Builder. It was a decent day, glad to see some trains in a new location.