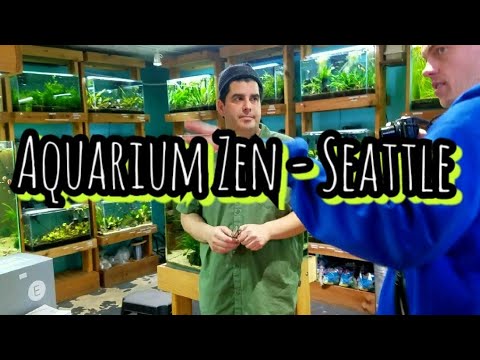 Do You Want To Share Your Own Aquariums?!
The New Facebook Group, where you can chat with fellow YouTube followers, share your own home set up of plants, fish, shrimp and tech, as well as enter giveaways. This Group is also a great place to swap plants or critters, along with any of my plants, shrimp and fish. Also don’t hesitate to ask questions and for advice. or suggest ideas for future videos!

Patreon backer rewards and how to support the channel!
https://www.patreon.com/somainkdesigns

Support the channel, Get Rewards!
https://www.patreon.com/somainkdesigns

In this video Dustin- The One and Only (from Dustin’s Fish Tanks on Youtube) and I, visit Aquarium Zen in Seattle. I am fortunate enough to call this shop my neighborhood fish and aquatic plant store, however it is my favorite shop in the Northwestern USA, period.

This was a quick video run, through the store, showing the tanks full of fish and exotic aquatic plants, as well as manicured Amono ADA, low iron glass, rimless tanks and high tech CO2 supported, show vivariums, and living walls.

Steve Waldron, the Owner and local aquascaping expert, gives us a great little interview in the second half of the video and explains some of the engineering, time and collecting of plants and unique fish that went into this Seattle fish shop. From ADF tissue cultures to Kessil and Twin Star lighting to ADA & Do¡aqua glass fixtures and tanks, this is a must see shop if you’re in Seattle.

It is not as tightly manicured as Aquaria on the Eastside, but rather it is a living breathing organism, and a speak easy style shop, tucked away, almost in an alley. It is constantly changing with Dutch, nature, jungle and iwagumi style scapes decorating the entire store.

Big Thanks goes out to Steve for letting Dustin and I film, and I hope you check out Dustin’s Channel for a more thorough interview which I helped film as Steve philosophizes over the design and life he has fostered in his own shop.