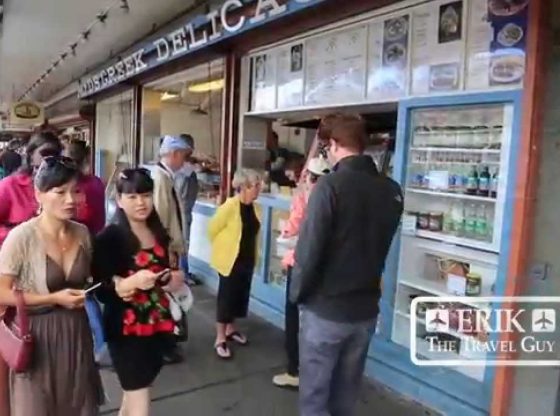 Seattle is one of the “greenest” cities in North America. The “Emerald City” is urban yet green, sophisticated and yet not snobby. Seattle has something for everyone. In this video, Erik The Travel Guy explores some of his favorite spots.

The Underground Tour – The guided walking tour begins beneath Doc Maynard’s Public House, moves to Pioneer Square, and then travels underground for an exclusive view of the buried city. 75- 90 minutes. http://www.undergroundtour.com/

Fremont Troll – This amazing Troll Under the Bridge is an interactive, 6.5-ton, mixed media statue made by local artists. http://www.seattle.gov/neighborhoods/programs-and-services/p-patch-community-gardening/p-patch-list/trolls-knoll

The Museum of Flight – Large educational museum with aircraft & space vehicles on display, historical exhibits & more. General admission for adults is .00. The Museum is open daily from 10:00 AM – 5:00 PM. http://www.museumofflight.org/

The Seattle Aquarium at the Seattle Waterfront – The best harbor views are from the central portion, near the Seattle Aquarium. The aquarium is a popular spot for families and offers an underwater viewing dome, coral-reef tank, otters & a touch-tank. Tickets for adults are .95; youth (ages 4-12) are .95. Open 9:30-5:00 PM daily. http://www.seattleaquarium.org/

The Space Needle – Iconic, 605-ft.-tall spire at the Seattle Center, with an observation deck & a rotating restaurant. The observation deck is open daily from 8:00 AM – midnight. Tickets range from -, with the earlier price for early morning and later evening. https://www.spaceneedle.com/home/

If you’re traveling to Seattle soon, and want to know the best times to travel to Seattle and the best things to do in Seattle, check out our Seattle Itinerary! The itinerary has great tips for when to visit Seattle and where to go as well as recommendations on the signature and must-try dishes at the best local restaurants.

The itinerary also includes hotel recommendations and contact information for easy booking for all hotels and activities. http://www.erikthetravelguy.com/store/p5/Seattle%2C_WA_Itinerary.html

Seattle Whale Watching
What To Do In Seattle