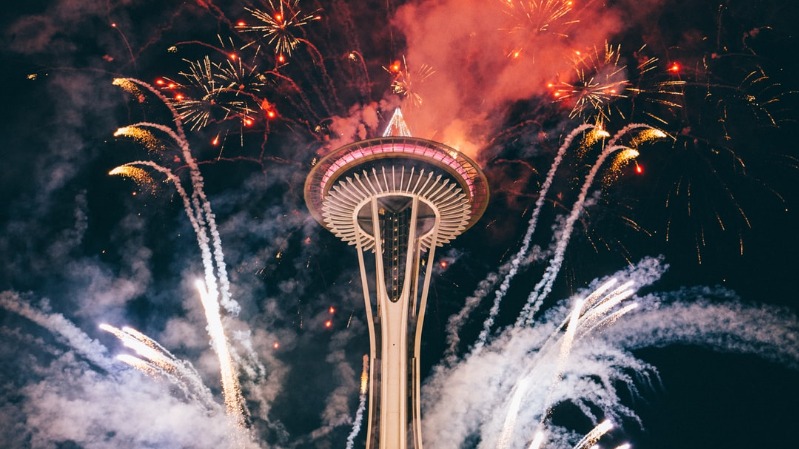 Formerly known as “The Space Cage”, the Seattle Space Needle is an iconic structure rising at dazzling heights above the city and one of Seattle’s top attractions. Equipped with an observation deck from where you can get views of the Emerald City and its surroundings, including Lake Union, Mount Rainier, the Olympic and Cascade Mountains, the Space Needle tops the list of must-visits for many tourists.

Commissioned on the occasion of the 1962 World’s Fair, the Space Needle’s futuristic design is explained by the exhibition’s theme – Century21. The initial project was the result of a compromise between the businessman Edward Carlson’s idea and the two architects’ (John Graham and Victor Steinbrueck) design.

Taking the Stuttgart Tower as inspiration, Carlson made the initial sketch of the tower on a napkin. Graham turned the balloon into a UFO concept, and Steinbrueck designed the hourglass silhouette of the tower. The colors of the paint coatings were picked to suit the the 21st Century theme: the support pillars feature an Astronaut White color, the body is Orbital Olive, the halo – Re-entry Red, and the roof features a Galaxy Gold chromatic shade.

Seattle’s iconic structure was completed in December 1961, but it was officially opened only on April 21st, 1962 – the World’s Fair’s opening day.

Not sure you have enough time to visit each of Seattle’s attractions? Take a tour and sample the Emerald City’s highlights in one day

Urban Adventure Scavenger Hunt
The whole city becomes a giant game board while you play your scavenger hunt and explore Seattle in a playful and active way.

Visiting the Space Needle is a must, especially if it’s your first time in Seattle. It is advisable you buy your admission pass beforehand if you don’t want to waste your time standing in line for a ticket.

As the Space Needle was built to symbolize the 21st century, a visit to this Seattle landmark is also a digital experience. Admission tickets to the Observation Deck include downloads from Space Shots Photograph.

You can save money with a Seattle City Pass, which includes entries to Seattle’s premier attractions. For the Space Needle, you get two visits to the top within 24-hour. It is advisable you plan two visits to the Observation Deck within one day. You won’t regret it: the view from atop changes dramatically depending on the moment of the day, and is quite beautiful.

A duo pas for the Space Needle and the Chihuly Garden and Glass is also available if you plan on visiting also this Seattle attraction located at Seattle Center, just a few steps away from the Space Needle.

If you want to get some souvenirs, you stop at the gift shop located at the base, and known as Space Base. If you want to grab a bite with a view, there is no better choice in Seattle than the 200-seat SkyCity located at 500 feet of height. Here you can taste the signature dishes conceived by Chef Jeff Maxfield. However, expect both the shop and the restaurant to be overpriced.