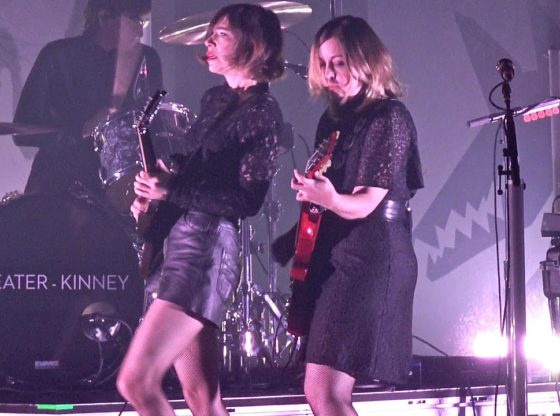 Sleater-Kinney play their song “Jumpers” live in concert at the Fox Theater in Oakland, California on November 16, 2019. Jumpers was originally released on the band’s seventh studio album, The Woods (2005). Sleater Kinney are Carrie Brownstein (guitar and vocals) and Corin Tucker (guitar and vocals). Joining them onstage were Katie Harkin (guitar and keyboards), Angie Boylan (drums), and Toko Yasuda (keyboards).

I spend the afternoon in cars
I sit in traffic jams for hours
Don’t push me, I am not OK

The sky is blue most every day
The lemons grow like tumors, they—
Are tiny suns infused with sour

Sing your last song
About the beginning
Sing it out loud
So the people can hear, let’s go

My falling shape will draw a line
Between the blue of sea and sky
I’m not a bird, I’m not a plane