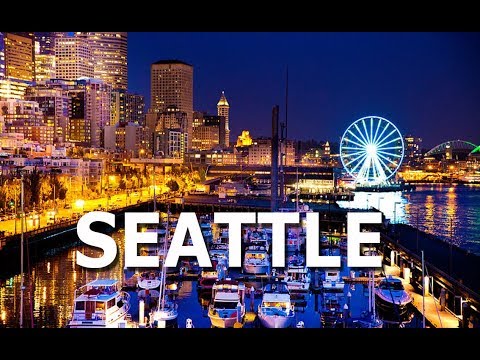 LOCATION
The city is situated on an isthmus between Puget Sound (an inlet of the Pacific Ocean) and Lake Washington. Seattle is About 100 miles south of the Canada–United States border. With a land area of 83.9 square miles Seattle is the northernmost city.

The Seattle is hilly. The city lies on several hills, including Capitol Hill, First Hill, West Seattle, Beacon Hill, Magnolia, Denny Hill, and Queen Anne. The Kitsap and the Olympic peninsulas along with the Olympic Mountains lie to the west of Puget Sound, while the Cascade Range and Lake Sammamish lie to the east of Lake Washington.

HISTORY
Englishman George Vancouver mapped the area in the 1790s, but the first white settlers didn’t arrive until 1851. Luther Collins led a party of settlers to the mouth of the Duwamish River (in what is today southern Seattle), followed shortly by a party led by the more notable Arthur A. Denny of Chicago, who settled at Alki Point in West Seattle. Confrontations between the original settlers initially flared, only to die out as the groups settled together on the Elliott Bay. The area was then named Seattle by David Maynard, in honor of Chief Si’ahl of the Duwamish & Suquamish tribes, and later officially established as a city in 1869.

CLIMATE
A common atmosphere of Seattle is that the sky is always grey, rainy, and depressing. Seattle is an excellent place to spend summer. It’s warm and comfortable, with little to moderate humidity and temperatures averaging in the upper about 25°C.

Because of Seattle’s high latitude, the sky is bright from around 4:30AM to 10PM during the summer months, giving you ample daylight for outdoor activities.

Due to its location in the Pacific Ring of Fire, Seattle is in a major earthquake zone.

ARCHITECTURE
Most of the architectural attractions in Seattle are located in the downtown area, easily traversed on foot. Among the highlights are the Central Library, the Columbia Center and the Seattle City Hall. On the south side of Downtown, near Pioneer Square, is the Smith Tower, an Art Deco building which is Seattle’s oldest skyscraper and has an observation deck.

ECONOMY
Seattle’s economy is driven by a mix of older industrial companies, and new Internet and technology companies, service and design companies.

The Port of Seattle, which also operates Seattle–Tacoma International Airport, is a major gateway for trade with Asia and cruises to Alaska. It also is the 8th largest port in the United States

It was ranked as America’s No. 1 “smarter city” based on its government policies and green economy.

Aerospace manufacturer Boeing was the largest company based in Seattle Before moving its headquarters to Chicago. The company also has large aircraft manufacturing plants in Seattle. It remains the largest private employer in the Seattle metropolitan area.