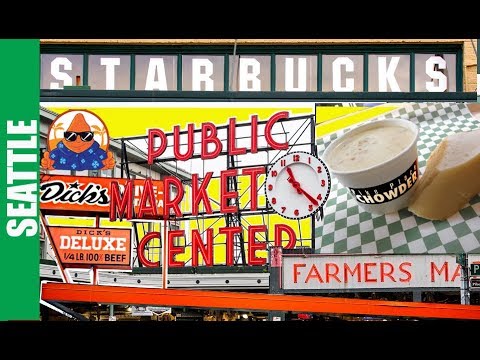 Seattle Vacation Day Trip Travel Guide
Driving up from Portland,Oregon we head to Seattle for another day Trip! We had to squeeze in as much fun as we could before flying back home.
1st and Pike. This corner store is at the gateway to Seattle’s historic Pike Place Market – a location of rich history and vital importance to both Starbucks and the Emerald City. It was, after all, in the Market that the original Starbucks opened in 1971
The Pike Place Starbucks store, commonly called the Original Starbucks, is the first Starbucks store, established in 1971 at Pike Place Market in downtown Seattle, Washington, United States
102 Pike St, Seattle, WA 98101

Dick’s Drive-In, or simply Dick’s, is a fast-food restaurant chain in the Seattle, Washington area Seattle rappers, from Macklemore to Blue Scholars, have also done in their music videos here.
Dick’s Deluxe, which is a quarter pounder with cheese, mayo, lettuce, pickle, with a dual patty.
Long-running fast-food chain with a cult following for its homemade fries, burgers & shakes.Unchanged” since the ’50s, this “legendary” Seattle chain of “fast-food joints” earns its “cult following” with “always-fresh” burgers, “homemade french fries” and “hand-dipped shakes
“Dick’s Drive-In” is a throwback to the 50s and a Seattle staple
115 Broadway E, Seattle, WA 98102

Pike Place Chowder Local seafood institution serving traditional & specialty chowders in a counter-serve setting.
1530 Post Alley, Seattle, WA 98101
Seattle’s Award-Winning, Hall-of-Fame chowder cafés named America’s#1 MOST POPULAR DISH IN THE COUNTRY, ACCORDING TO YELP
Hands down, the best clam chowder I ever had. The chowder is soooo flavorful and creamy!

Gum Wall – Seattle, Washington – Atlas Obscura The Market Theater Gum Wall is a brick wall covered in used chewing gum, in an alleyway in downtown Seattle. It is located in Post Alley under Pike Place Market
1428 Post Alley, Seattle, WA 98101
In an alley easy to reach from Pikes Place market, is Post Alley.
The Seattle Gum Wall has been gathering gum since the early 1990s. The tradition began when people waiting for shows at nearby Unexpected Productions would stick gum to the wall and coins to the gum (you won’t see a lot of coins on the wall these days, just gum). Theater workers tried to keep the wall clean, but it didn’t work. The gum stuck—literally.
Up until November 2015, the gum wall had never been cleaned, meaning there was more than 20 years of gum stuck to the brick facade. Yes, it was (and is!) a bit gross. Before that point, there were spots in the wall where the gum was several inches thick!

The Space Needle is an observation tower in Seattle, Washington, a landmark of the Pacific Northwest, and an icon of Seattle.
Address: 400 Broad St, Seattle, WA 98109
Height: 605′
Built in 1962, the Space Needle has since become the symbol of Seattle, and one of the most recognizable structures in the world.