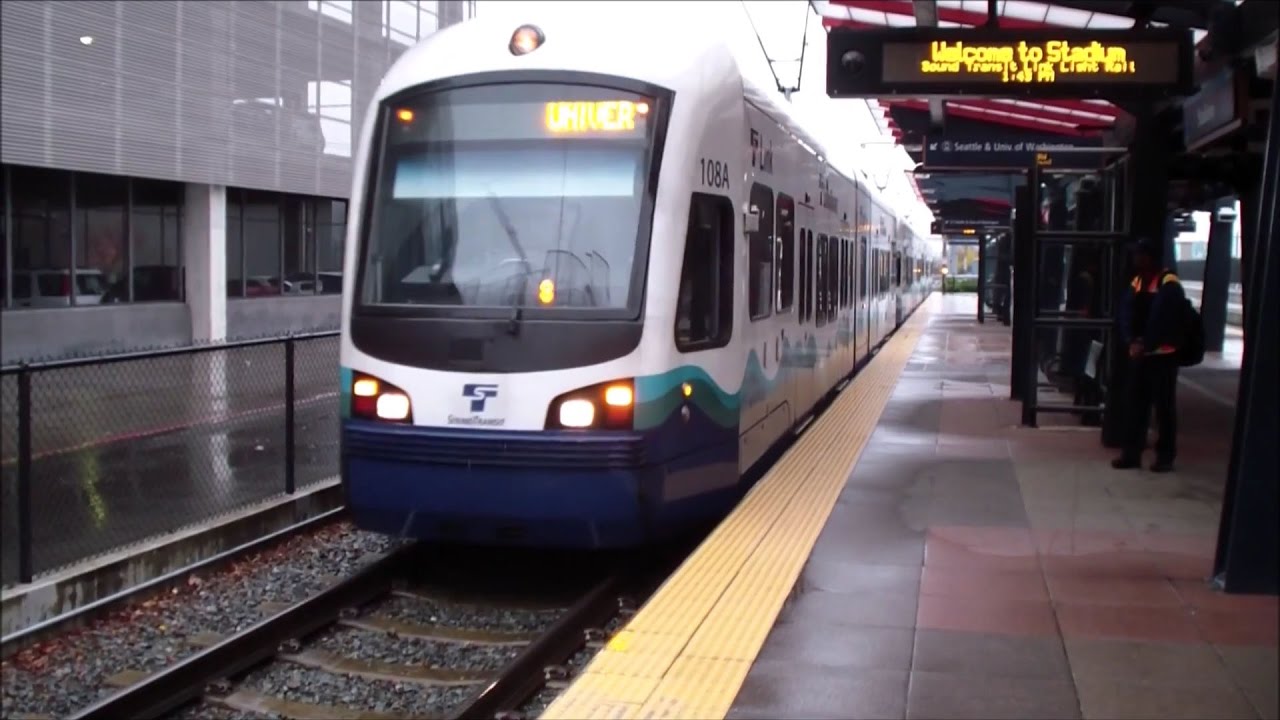 A journey right through the heart of Downtown Seattle on Sound Transit’s Central Link light rail line, beginning at Stadium station, next to Safeco and CentruryLink Fields, and ending at the northern terminal of the line, University of Washington.

Even at 50 mph through underground portions, the ride on Link remains incredibly smooth. It’s a stark contrast to how bumpy and rough BART feels.

Link Light Rail, operated by Sound Transit, is one of the newest light rail projects in the United States. The current system includes two lines – the Tacoma Link and the Central Link – but Seattle is already building massive extensions that will take this relatively small transit system all throughout the GreaterSeattle Area.

The Central Link and Tacoma Link never share track or cross paths once; in fact, they are 30 miles apart.

The Tacoma Link runs mostly in and around Downtown Tacoma, with six stops spanning from the Tacoma Dome to the Theater District. It was the first streetcar line in the Greater Seattle Area to open in 63 years.

The Central Link, opened in 2009, is the main light rail line of Seattle and runs between the University of Washington and Angle Lake Station, with major stops at Seattle/Tacoma International Airport, Stadium (at Safeco Field and CenturyLink field) and Westlake, right in the heart of Downtown Seattle.

Considering how new Seattle’s rail system is, it’s not surprising it still serves a relatively small area of the region. Seattle is not about to stop building more track, however, and there are several ambitious extension plans coming in the next several years.

The first extension to hit the Central Link occurred five months after the line initially opened, in December 2009, when the line was extended from Tukwila to Sea/Tac Int’l Airport.

On the Central Link, Sound is already building the extension of the line north of University of Washington to the busy Northgate Transit Center, with stops at University District and Roosevelt. This extension should be open by 2021.

By 2023, Sound wishes to continue further north, past Northgate, all the way to Lynnwood. This would make the total track mileage of the Central Link at 33 miles, with 23 stations.

But that’s not all. Sound is currently planning to extend the Central Link from the current southern terminal, Angle Lake, to the cities of Des Moines and Kent by 2023. By 2030, the line could reach Federal Way Transit Center, near Tacoma, but this plan was dropped from the previously stated extension due to the Recession.

Heading east, Sound began construction of the “East Link”in 2016. This extension will introduce a brand new line, the Blue Line (the other Central Link line is called the Red Line, even though no one in Seattle calls it that), to the Link light rail system.

The Blue Line will travel alongside the Red Line from Northgate to International District/Chinatown, where it will split off and begin heading east. It will then travel under Lake Washington, to Bellevue, and terminate at Redmond Technology Center, home of tech giant Microsoft. Later on, the line could be extended further east to Downtown Redmond.

Moving to the Tacoma Link, the extension north of Downtown Tacoma to the city’s Stadium District and Hilltop is expected to open in 2022.

Seattle is one of many urban regions feeling a renaissance in rail-based transit options. In several years, Seattle’s rail-based transportation could be the envy of the West Coast. We will have to wait and see.