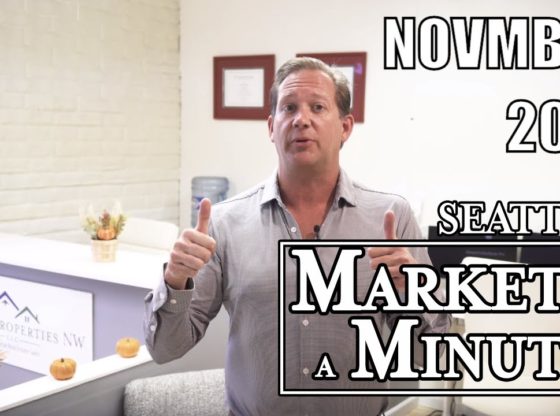 Active listings of homes and condos totaled 14,379, the lowest level since April. Compared to a year ago, last month’s selection declined more than 21% and was down 10% from September, according to the new report from Northwest MLS. The year-over-year and month-to-month volume of new listings also declined last month. On a positive note, MLS figures show system-wide gains in October’s pending sales (up nearly 5.6%), closed sales (up 4.1%) and prices (up nearly 7.7%) compared to a year ago.

MLS figures for its 23-county service area show 1.73 months of supply overall. Ten counties, mostly in the Puget Sound area, have less than two months of supply of single family homes and condominiums, whereas 4-to-6 months is a level industry-watchers use as a gauge of a balanced market.

Northwest MLS records show the last time the supply of homes and condos exceeded three months was February 2015, when there was just over 3.5 months of supply.

Compared to the same month a year ago, October’s supply of active listings declined by double-digits in 18 of the 23 counties in the NWMLS report. Thurston County had the sharpest decline (down 35.5%), followed by Pierce (down 28.7%) and Kitsap (down nearly 27%).

Despite the slim selection, demand was strong as the volume of pending sales (9,517) outgained the number of new listings added during October (8,394). Nine counties reported double-digit jumps in pending sales compared to 12 months ago.

✅ If You Are A Real Estate Broker Looking To Increase Your Commission Split and Eliminate Your Monthly Expenses Consider Summit Properties NW. Summit Offers a Simple 80/20 Commission Split With No Other Associated Fees & A Low ,000 Annual Cap!