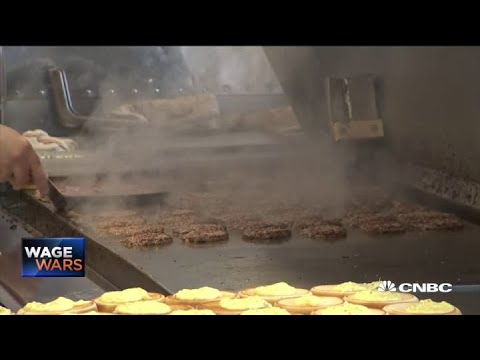 Seattle is among the country’s highest wage cities. CNBC’s Kate Rogers reports from Seattle, Wash. on the unintended consequences of the wage hike.

Its employees opted to work fewer hours as their wages rose, a tall order in a tight labor market.

“We thought with higher wages it would be easier to get people to take more hours, but it’s been the opposite,” said Jasmine Donovan, president of Dick’s. She added that the company has had to raise prices for the first time in its history because of the cost of labor alone, whereas in the past, food costs drove such hikes.

Seattle’s law, which gradually increases its minimum wage to an hour by 2021 from just over an hour in 2014, is now at the forefront of a national debate over the impacts of progressive wage increases. It comes at a time when top Democratic presidential candidates like Bernie Sanders and Joe Biden are calling for a per hour federal minimum wage as they try to appeal to working-class voters. The federal minimum wage is currently .25 an hour and has not been increased in over a decade.

“Seattle was catalytic to the entire national movement because what the Seattle City Council did by passing the law was show the entire nation that was not a ridiculous demand that people were laughing at back in 2012, but an actual key piece of policy that allowed for working people all across that city to have more money in their pockets that they spent in their local neighborhoods and then grew the economy and local business as a result,” said Mary Kay Henry, president of the Service Employees International Union, which launched the Fight for and a Union campaign.

Businesses like Dick’s have seen their costs go up. Dick’s pays above minimum wage, with some locations starting workers at and an hour, and most workers are students in their 20s. Benefits like 401(k) plans and health insurance are also available to workers regardless of the number of hours worked. But higher minimum wages citywide pressure employers to increase pay even if they are already above that threshold, in order to compete for talent.

Meanwhile, the Seattle law has been life changing for workers like Martin Johnson, who lobbied for higher pay with the advocacy group Working Washington. He works three minimum wage jobs — as a temporary cook on game days at the city’s stadiums, as a janitor at Costco on the overnight shift and as a handyman in his own small business. The raise brought with it more dignity for workers and boosted morale, he said.

“Instead of being paid an hour, you’re getting an hour to do the same work. You feel better about yourself — you feel appreciated,” Johnson, 54, said.

Turn to CNBC TV for the latest stock market news and analysis. From market futures to live price updates CNBC is the leader in business news worldwide.