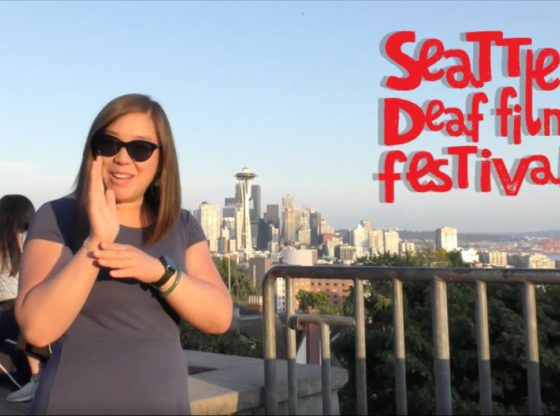 SDFF is back! The Northwest’s biggest Deaf film event will return April 3-5, 2020. Mark your calendars and get ready for a storm of #DeafTalent.

[image description: The Deaf Spotlight logo (the words “DEAF”, “SPOT”, and “LIGHT” stacked into a cube shape” spins onto a black screen. A static animation transitions to people in front of a railing on a sunny day. In the background, the Space Needle and other tall buildings are visible in the distance. In the foreground, a feminine-presenting person in a green dress is looking away from the camera through coin-operated binoculars. The person turns around with a smile. They are light-skinned with Asian features, wearing dark sunglasses and a watch. The words “Patty Liang / Executive Director” appear next to them.]

Why not come to our film festival? You can watch lots of Deaf films and mingle with #DeafTalent.

Hope to see you there. Don’t forget your umbrella!

[image description: Patty reaches down and picks up a red umbrella, then smiles at the camera. The frame transitions to artwork advertising Seattle Deaf Film Festival, with a drawn red umbrella replacing the one that Patty held up. The umbrella sticks out of a rendered Seattle skyline, which is in the middle of a row of trees on the bottom. On the umbrella are the white words “Seattle Deaf Film Festival”. To the left of the skyline are the words “April 3-5, 2020”. To the right it says “deafspotlight.org”.]

More info on Save the Date: Seattle Deaf Film Festival 2020