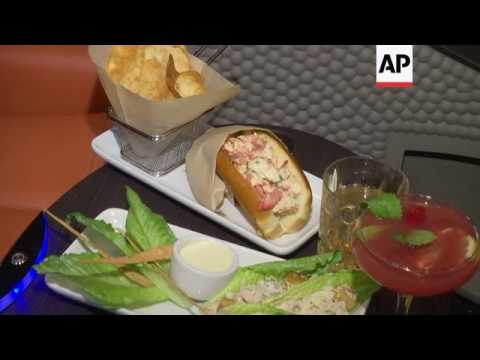 (7 Oct 2016) LUXURY IPIC THEATER OPENS IN MANHATTAN
More and more people are opting to stay home to watch movies these days. iPic Entertainment is continuing its effort to reverse that trend with the opening of its first iPic luxury theater in New York City.
The iPic Theaters Fulton Market opens its door to the public Friday (7 OCT), offering what iPic Entertainment CEO and Founder Hamid Hashemi says is the most comfortable way to watch a movie in a movie theater.
“The lap of luxury – as you can see we’re sitting in a pod. These are custom designed patented pods that encapsulate two leather-covered seats. The seats are reclining, push of a button, you can get your seats reclined, pillows and blankets, popcorn is no charge. This is truly an affordable luxury, really the best way that can watch a movie. If you were to watch a movie at your home, this is how you would be watching it.”
Hashemi maintains that even with advancements in home entertainment, there’s still nothing like watching a movie – with other people – at the theater.
“You can have the greatest kitchen in your house, you still go out to a restaurant. You’re going out to a restaurant because you’re going for a shared experience. Movies are the same. Yes, you can watch them at home, people have the greatest flat screen TVs now and a great sound system but still really nothing replaces sharing those feelings and emotions with a group of people.”
This is the 15th luxury theater iPic Entertainment has opened in the United States since 2006, with other theaters in such cities as Los Angeles, Dallas, Miami, Chicago and Redmond in Washington State.
Part of the luxury experience is getting to eat food – beyond just popcorn, nachos and Raisinets and served right to your seat. iPic theaters feature food developed by Chef Sherry Yard, who says she’s a movie buff herself.
“We’re all busy. We don’t have that much time. Quite often you’re running, you’re trying to get to the theater to see a great movie and you’re trying to fit in a dinner right before hand and here at iPic, we’ve redefined the way you can dine in the dark. It’s truly amazing that you can have tuna on crispy rice, you can have a lobster roll, Caesar salads, filet mignon sliders, just the most amazing food right here at your seat, laid back, watching the best movies ever.”
Yard says the food is crafted so moviegoers won’t make a mess while eating during the film.
“In addition to our creativity, the most important thing is that the guest can dine in the dark and when you dine in the dark you can’t really see perfectly and you’re watching the movie, so you need food that’s really going to interact and handheld items. So things you can pick up with your fingers, things that are easy to eat – never too loud, never too smelly.”
The company even features what it calls “ninja” butlers who will bring people food in the theater before and during the movie, as quickly and quietly as possible, so as not to disturb the movie watching experience.
There’s even a full restaurant and bar upstairs at iPic Theaters Fulton Market called the Tuck Room, featuring Yard’s food and some creative drinks from executive bartender and sommelier Adam Seger. He says he calls his approach to providing drinks as “farm to glass.”
“We’re really in touch with the seasons, with making everything we possibly can make from scratch from maraschino cherries, our own homemade ginger beer to even hand cutting our own ice for our Old Fashions and for Manhattans and then we also are inspired from everything from the rich history in lower Manhattan.”
The iPic Theater is located in the Fulton Market Building in Manhattan’s South Street Seaport.