Living under a Bridge Doesn’t Stop This Seattle Homeless Woman from Staying Positive. 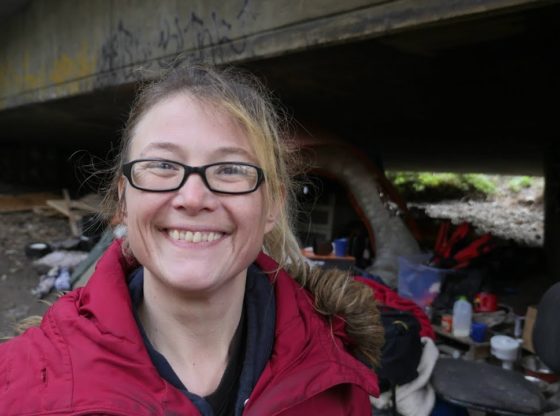 UPDATE: New vlog Manda shows us her camp and why it feels good to give https://youtu.be/mQ2RBLLy54w

A few months back I logged onto Facebook and was greeted by a smiling homeless woman’s selfie in front of a tent holding up a cup of coffee. It was captioned “good morning.” Today, I met Manda at her homeless encampment where she made me a cup of coffee!

Most of the time I meet homeless people in person on the streets or in a homeless shelter. Then we often connect online and become friends. Manda and I became friends online first. I got to know her a little before seeing how she survives homelessness. I am having a hard time processing it all. Lots of emotions both good and bad right now!

Manda is an amazing woman. She is disabled from severe brain trauma, yet because she is high functioning, she falls through the gaps in the safety net. I have been working with her trying to help find a path out of homelessness, but the walls bureaucracy are impossible to break through.

For all the people that believe homeless people are lazy, I wish they could just spend an hour in Manda’s shoes! She works hard to keep her tent camp clean. She works hard getting to treatment and therapy. She works hard every single day trying to survive. And she works extremely hard to stay positive while facing the madness of homelessness each and every day!

We must get Manda out from under that bridge into housing. Because of her health and being a woman out on the streets, she is extremely vulnerable living outside. If you are connected to social services in Seattle or know anyone that is, please reach out to them and forward Manda’s story. I have talked to her social worker. Her health issues are severe, and we need to get this woman inside!

If you’d like to help support her directly this is her GoFundMe page https://www.gofundme.com/4qcfk0o

More info on Living under a Bridge Doesn’t Stop This Seattle Homeless Woman from Staying Positive.