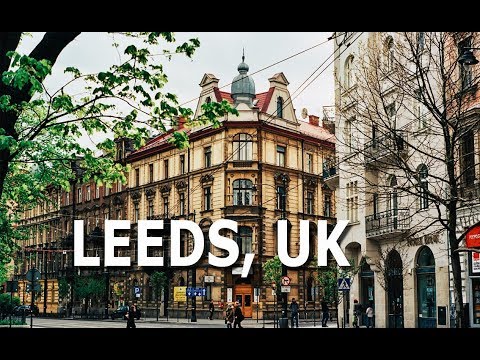 Leeds is the largest city in the county of West Yorkshire, England and is known for its shopping, nightlife, universities, and sports. Leeds has become the largest legal and financial centre, outside London. Leeds is an attractive city with Georgian, Victorian, 20th and 21st century architecture and many museums, cafés, restaurants and theatres to visit.

LOCATION
Leeds is located 169 miles (272 km) north-northwest of London, on the valley of the River Aire. The city centre lies in a narrow section of the Aire Valley at about 206 feet (63 m) above sea level. The northern boundary follows the River Wharfe for several miles, but it crosses the river to include the part of Otley which lies north of the river.

HISTORY
Leeds was a small manorial borough in the 13th century, and in the 17th and 18th centuries it became a major centre for the production and trading of wool, and in the Industrial Revolution a major mill town.

POPULATION
Leeds has the second-highest population of any local authority district in the UK. The majority of people in Leeds identify themselves as Christian. The proportion of Muslims is 3.0% of the population. Leeds has the third-largest community of Jews in the United Kingdom, after those of London and Manchester.

CLIMATE
Leeds has a climate that is oceanic. Summers are usually mild, with moderate rainfall, while winters are chilly, cloudy with occasional snow and frost. July is the warmest month, with a mean temperature of 16 °C (61 °F), while the coldest month is January, with a mean temperature of 3 °C (37 °F). Temperatures above 30 °C (86 °F) and below −10 °C (14 °F) are not very common but can happen occasionally.

TRANSPORT
Leeds-Bradford International Airport. Leeds is very accessible by air from major European destinations, with an airport 10 miles north-west of the city centre. Budget airline Jet2 offer a wide range of flights to and from Leeds. Leeds has been identified as one of the most car-dependent cities in the UK. There is a regular bus service into the city (journey time 35 minutes) and cabs are plentiful.

ECONOMY
Leeds has one of the most diverse economies of all the UK’s main employment centres and has seen the fastest rate of private-sector jobs growth of any UK city. It also has the highest ratio of private to public sector jobs of all the UK’s Core Cities. Leeds is the cultural, financial and commercial heart of the West Yorkshire Urban Area. more than 30 national and international banks located in the city. The largest sub-sectors are engineering, printing and publishing, food and drink, chemicals and medical technology.