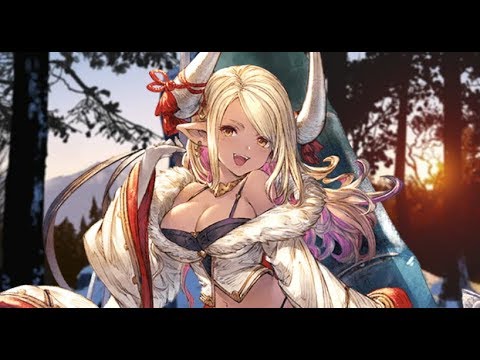 Feed URL: ”https://www.bing.com/news/search?q=Granblue not valid and removed from fetch.

Guardian of the North-Northwest

Happy new year 2019 and welcome the year of the boar zodiac.

This year, the crew goes to the Mountain to visit the boar shrine, but got lost along the way. There they met a young woman with an eccentric looking. Things got tense for a moment but soon they clear each other’s misunderstanding as she leads the crew to the shrine.

There she performs the opening ceremony of the zodiac year, With a large bamboo that she carried, she effortlessly exerts the muscle needed to move that 2 meter bamboo to full momentum that destroys a huge boulder effortlessly. Such is the prowess of this year’s general.

Yet, people somehow dissapointed with this decade’s Divine Boar.
For it turned out she’s kind of special: she ain’t blessed with special strength or anything unlike the previous divine boars. The expectation that many people have for this year pressured to her and her insecurities can contain much….

And so she decided to join the crew to discover more of what she can do, with some thorough encouragement that is.

A some long time has passed since the day Kumbhira joined the crew, The crew plans for Ruria’s local food massacre yet stumbled on decision where to go. Khumbira too got clueless on determine which place to go.

Suddenly, Anila and Anchira came to visit the crew, anchira quickly snuggled her out of excitement where as Anila recommend for the crew to go shop at certain market district and off they go. And so off they go to buy some stuffs.

Everyone goes hectic as they are hyped to buy the souvenirs before them where as Kumbhira got panic from her reaction to other’s behaviours. That altho she starts to enjoy her experience with the gangs. They beat up some ruffians along the way.

The gang finish buying stuffs and decided to take some rest in the middle of a plain meadow. There everyone had a fluffy fluffy moment as everyone falls asleep quickly except Anila and Kumbhira, the two engage in some conversations. Looking at Anchira on big sleepy smile on her face while laying on Anila’s lap. Kumbhira can’t help but mention of how happy the Spark gacha creator is for spending time shopping with Anila.

Anila quickly corrects her that it was actually Kumbhira herself that make all the trip was totally worthwhile for Anchira and use the opportunity to open up with each other as their last time of meeting was only on Zodiac’s formal business. As well as encouraging her to be more open and honest with her feelings toward the gang.

it paid off, Moments later, as Everyone suprised Kumbhira of buying her accesories that she paid attention on the market, she got so happy to the point that all the 3 pigs pops out from her (man this might be a gimmick on the doujins), She starts pouting about her plans on visiting another hot spring for vacation without stopping for even one bit. She finally is able to fully speak out her desires without so many awkwardness or anxieties just like nepgear when it comes to robots and Machineries.

=======================================
When she was first revealed in GBFest, Almost everyone tought she’d be a metera-esque kind of character, same for me. Except that it also turned out she is voiced the very Yui-Horie, (Amagi, Nepgear) the voice for Good-Girls that expressed Energetic determination yet usually also an awkwardly shy person or lacking a little in self-esteem. So i’m not sure which one will she be,

fortunately it’s the latter. Complete with insecurities whether or not she can accomplish her mission and feeling of overshadowed by her predecessor. And also once open up, she can’t stop showing her excitement toward it.

man, what a good girl.