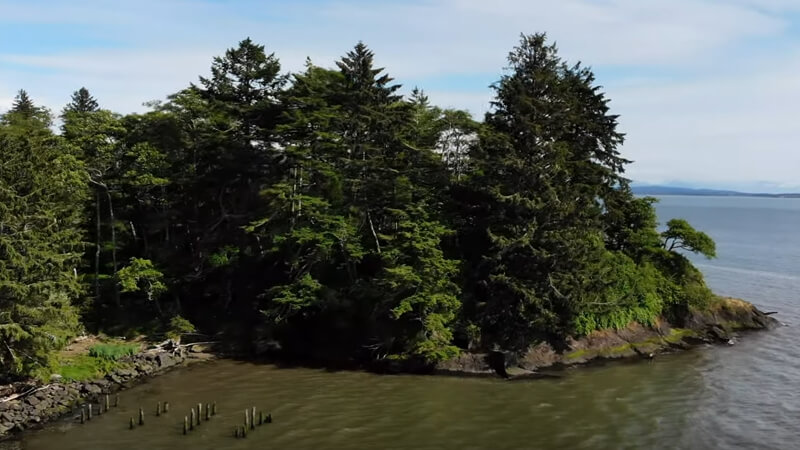 Tall pines, scenic views, brambling blackberries, and winding paths lead to the summit on the Scarborough Hill in the historic Fort Columbia State. Fort Columbia is located just outside of Chinook, Washington on Highway 101 just across the river from Astoria, Oregon. The park is quite large, covering some 593 acres and is a day-use only park. In its day it was considered one of the best places for coastal defense and thus was used by the military as a guard post to the entrance to the Columbia River along with Fort Stevens and Fort Canby. Built between 1896 and 1904, the fort consisted of several buildings with three major guns. Two six inch cannons remain on site at Battery 246; there are only four similar cannons in existence remaining in the world. The Gun batteries on site remain open for people to wander through and the interpretative panels nearby explain how the fort worked when it was in service.

At the end of World War II the majority of forts that were functioning in the area were considered obsolete and declared surplus by the military and much of the lands were turned over to the states. Fort Columbia became a State Park in 1950, five years post World War II. The site is now recognized as a National Historic Landmark for its relationship to the fur trading industry. Besides the historic buildings and interpretive center, there is a beautiful hillside offering an expansive view of the Columbia River. You can take a self-guided park tour with interpretation of various features, including the historic gun emplacements.

The park itself has grown into a heavily wooded hillside with just over two miles of hiking trails. At the foot of the hill there is 6400 feet of Columbia River shoreline with sheltered coves perform the for river exploration. Deer wander throughout the park and picnic areas are plentiful for those wanting to enjoy the view, with or without the hike. The hike begins on the east side of the drive through, just past the row of buildings and to the East of the Commanding Officers Quarters Building. There is plenty of parking around the area and the hike is quite nice. The views are wooded with the thick trees, but the landscape is filled with forests and birds, blackberries grow wild on the path, and dense underbrush allows for cool temperatures at any time of the year. While you only catch a passing glimpse of the river between patches of forest, the hike is a nice 2.2 miles with an elevation change of about 750 feet. The recommended path from the map is to start out on the Military Road Trail until it intersects with the Scarborough Trail. Follow the Scarborough Trail to the summit at 780 feet. Then continue on down the wider Military Road Trail once more to the bottom. There are signs marking the way. While some maps show other trails they have not been well maintained in the past and should likely be avoided unless you are a truly avid hiker with a good gps.

If you visit the park in the summer, the park offers tours Friday thru Sunday from 11-4. The interpretive center is also open during those same times. There are two historic vacation houses that are available for overnight stays and are offered year round. They are a couple of the buildings farthest from the shoreline and have been fully renovated and updated. We were there on a Monday so none of the buildings were open but we peeked into the windows and admired the renovations and period representations that were created in the museum. It’s definitely worth the stop if you are there on the weekend. To make a reservation for an overnight stay, call in advance up to nine months ahead at (888) 226-7688. And please don’t forget to purchase your Discover Pass to park at all of the state parks in Washington.

Get out and enjoy the parks along the Columbia River! They each have a story to tell if you are listening and looking. Enjoy!