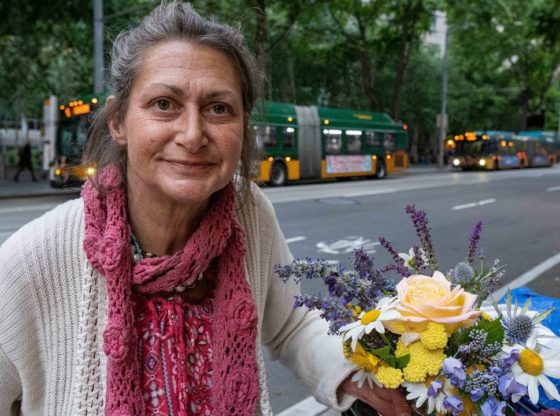 If it wasn’t for the shopping cart filled with all of her belongings, I would not have known Carolyn was homeless sleeping on the streets of Seattle.

Carolyn has found an injurious way to survive. She takes donations for flowers. Carolyn says acquires flowers and then either asks for donations or if the person is in a worse financial situation than her, Carolyn will give the flowers away.

Carolyn has lived homeless in Seattle for five years even sleeping outside during the winter. When I asked if anyone is helping her get out of homelessness, Carolyn responded no. She says she has a caseworker but continued that the caseworker is not able to do much. It’s often not the fault of social services. Without housing, there is not much a caseworker can do.

Carolyn talks about her mom, dad, and then her son dying. There is no research on this but as I travel I hear time and again how a death in the family can cause emotional trauma that takes a person down to homelessness. Carolyn says her sleeping on the streets is self-induced but the lack of mental health support and how it’s almost nearly impossible for a homeless person to get the help they need plays a significant role in Carolyn’s homelessness.