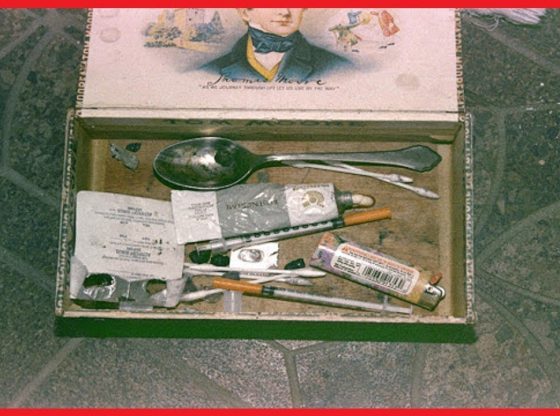 Dozens of never-before-seen pictures from the death investigation of Kurt Cobain, the rock legend and frontman for the band Nirvana who was found dead in his Seattle-area home in April 1994, were released by the Seattle Police Department (SPD) in March 2014.

The photographs taken at the scene at the time of Cobain’s death remained undeveloped until recently. The department announced it had developed the film as part of a re-examination of the rock superstar’s death investigation, which confirmed it was a suicide.

Though the pictures have a slight green tint because of deterioration, police say they show the scene more clearly than the earlier Polaroid photos taken by investigators.

“I was requested to look at the case because I’m a cold case detective and because it is 20 years later and it’s a high media case,” Detective Mike Ciesynski, who had the four rolls of film developed and conducted interviews, told KIRO-TV. “And there were always these conspiracy theorists out there, and so I was asked to look at the case and review it.”

Police said in 1994 that the case was clearly a suicide. Ciesynski said that is still the case after reviewing evidence.

Asked if his review had given him any reason to think the grunge rocker hadn’t taken his own life, Ciesynski replied, “No, nothing. But I had to clear up some issues that made people believe there was some type of a cover-up. And one of those was that I had to process some 35 mm film that never was processed before.

“At the time, in 1994, we would shoot our scenes with 35 mm cameras and we would back them up with Polaroids (photographs). That’s what we did in this case. And the … powers that be at the time decided just don’t develop the 35 mm film and just use your Polaroids, because the case was labeled a suicide, and the medical examiner’s office, they take photographs also, so the case actually shifts to them.

“So … we would not have processed that 35 mm film unless we were looking for something specific that wasn’t shown in the Polaroids. So I believed, ‘Let’s get rid of people thinking something else happened that did not happen, and developed the film.”‘

The final investigation report has not yet been completed, Ciesynski said.

He also said images of Cobain dead at the scene will not be released. “What are people going to gain from seeing pictures of Kurt Cobain laying on the ground with his hair blown back, with blood coming out of his nose and trauma to his eyes from a penetrating shotgun wound. How’s that going to benefit anybody?

“It wasn’t going to change my decision that this was a suicide, and actually I’m the one that makes the decision finally: Do we go forward or not? Morally I would not be able to justify that. Legally I can’t justify doing that.”