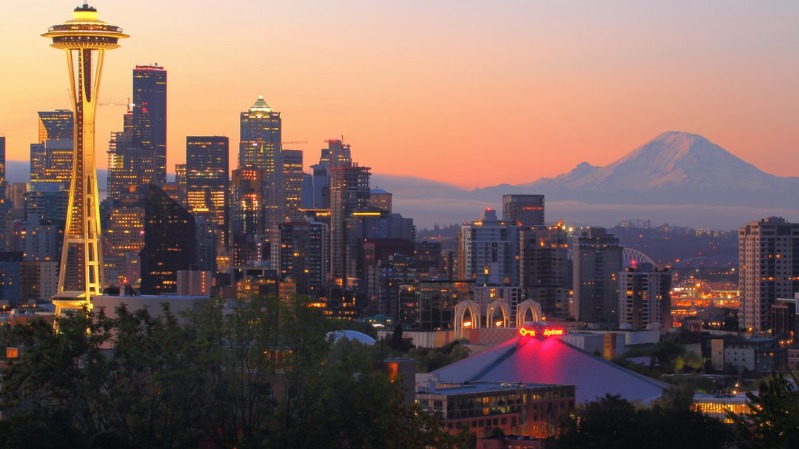 Home to Emerald City’s key attractions, Downtown Seattle is a rather quiet, functional business area dominated by tall buildings, and animate by its two twin hearts – Pike Place Market and Pioneer Square. Yet, there is never a dull moment in this Seattle neighborhood. With hordes of tourists touring the city’s top landmarks, plenty of events going on here, a nice collection of office buildings, lots of shops, restaurants and cafes, Seattle Downtown certainly has a good vibe, especially during weekdays. However, after business hours and on weekends, this central area can feel rather desolate.

A cavalcade of loud noises, strong smell and powerful personalities, Pike Place Market if not only one of Seattle’s iconic places. It is the soul of the city and historical landmark whose history goes back to 1907. This is actually the oldest still operating market in the entire country.

Pike Place Market was often dubbed “Seattle in a bottle” because of its faithful representation of the Emerald City’s many faces. Exploring the market is a great way of sampling this eclectic city’s highlights and understanding its life for what it really is.

Although not comparable with the Big Apple’s or Chicago’s art museums, Seattle Art Museum (SAM) is certainly worth a visit, especially for its exhibits displaying Native American artifacts. Its recent expansion was doubled by interesting acquisitions.

In front of the museum, you can admire the metal silhouette of the Hammering Man. Erected in 1992, it has a height of 48 feet, and equipped with a motor- powered arm that makes four moves per minute.

This asymmetrical glass and steel structure standing at 1000 Fourth Avenue is easily recognizable. This award-winning building was designed by Rem Koolhaas, and Prince-Ramus and LMN Architects back in 2004 and it was originally meant to serve as a community center. The edifice features a unique architectural style, being made up of a series of “floating platforms” that seem to have been wrapped together within a large steel network covered by a glass skin.

Once you have admired the exterior, it is worth taking a closer look inside. The interior decorations are as striking as the façade. This tech friendly space features modernistic lemon-yellow escalators and electric pink chairs.

For a breathtaking view over Downtown Seattle and its surroundings, get to the glass-ceiled Seattle Room.

A Seattle events venue whose construction cost about $120 million, Benaroya Concert Hall embodies the definition of luxury. Serving as main performing venue for the Seattle Symphony, it is nevertheless a landmark worth visiting even if you are not attending a concert.

Enter the glass-enclosed lobby to admire some great views of Elliott Bay with the snowy peaks of the Olympic Mountains in the background. Walk through the foyer and admire the rich chandeliers hanging from the elegant ceilings. They bear the signature of the famous local glassmaker Dale Chihuly.

Read more about Benaroya Concert Hall and book a ticket for a show here.

Previously known as the Northern Life Tower, the Seattle Tower is the first Seattle skyscraper to feature an Art Deco architectural style. Erected in 1928, according to Albertson, Wilson & Richardson’s designs, this 27-story structure is an interesting architectural landmark in Seattle.

Its facades’ brickwork combines 33 shades of grey, going from dark to light towards the top. The architects found inspiration for this gradient color scheme in the Pacific Northwest’s mountains. In the lobby you can admire an exquisite 18-karat-gold relief map.

Erected back in 1969, and formerly known as 1001 Fourth Avenue Plaza, this 50-story bronze structure was one of fist skyscrapers to have been built in Seattle. A wonder of architecture at the time it was built, this Downtown Seattle landmark may not look so modern nowadays, but it preserves its elegance.

Because of its shape and glittering facade, the Seattleites dubbed the Safeco Plaza ‘the box that the Space Needle came in.’

In the plaza in front of the skyscraper, you can admire a Henry Moore three pieces sculpture Vertebrae built as a consequence of the municipal ‘1% for art’ law. This means that the construction company had to donate 1% of Safeco Plaza’s total cost and the money went to public art, specifically to the sculpture now standing in front of the building.