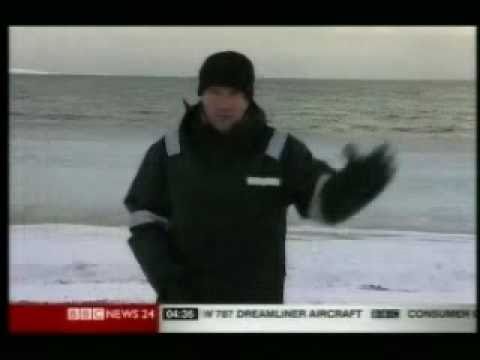 For centuries solid ice defeated attempts by global traders to find a way through the Northwest Passage. Now global warming has done just that.
Amid the arguments to and fro about the true extent of global warming, and the degree to which responsible people ought to be alarmed, I find one recent piece of news of the consequences of climate change particularly arresting.

Warming temperatures are melting the Arctic sea ice, making hitherto inaccessible stretches of the Arctic Ocean fully navigable. This September, satellite images showed the Northwest Passage to be ice free for the first time since records began, allowing shipping to travel comparatively unhindered from the Atlantic to the Pacific Ocean.

Hear Radio 4’s A Point of View
For more than 500 years, since Columbus first encountered the continent of America, European mariners have dreamed of finding and navigating a Northwest Passage – a direct shipping route from Europe to Asia across the Arctic Ocean. It ought surely to be possible, they argued, to sail from European ports northwards along the coast of Greenland, then westwards along an Arctic parallel, round Baffin Island off the northern coast of Canada, entering the Pacific between Alaska and Russia?

The search in the 16th Century for a corridor between the frozen northern wastes and the treacherous ice floes was driven by intense international competition and commercial pressures. Indeed, without the promise of financial gain riding on the outcome of these costly expeditions, there would have been no financial backers.

The existing sea route eastwards round the Cape of Good Hope, to India, China and the Spice Islands with their rich resources of pepper, cinnamon and nutmeg, was long and dangerous. If a way could be found from the Atlantic Ocean into the Pacific which stayed close to the North Pole, the new class of entrepreneurial merchants would be able to undercut their rivals by having their sea captains bring their exotic cargoes home faster and more economically.

In 1566, in his Discourse of a Discoverie for a new Passage to Cataia, or China, the English mariner Sir Humphrey Gilbert urged Queen Elizabeth I to support the search for the Northwest Passage in terms which still resonate today: “It were the only way for our princes to possess the wealth of all the east parts of the world, which is infinite.