Argentina’s Northwest – Things to do in Salta, Cafayate & Purmamarca

Home /Washington/Argentina’s Northwest – Things to do in Salta, Cafayate & Purmamarca 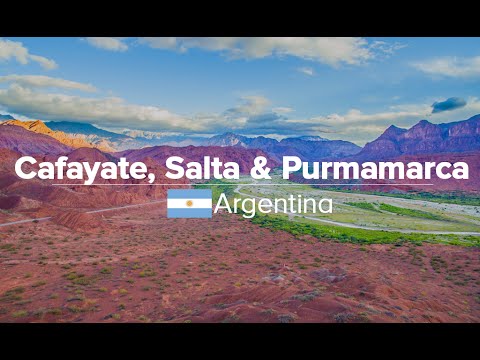 I traveled to the Northwest of Argentina to explore the colorful valleys, taste the wine and to show you the best things to do in Salta, Cafayate and Purmamarca
Related article: http://www.back-packer.org/arg_ebook

The stunning regions of Salta and Jujuy are not as popular outside of Argentina but offer so much to see and do. I’ve heard of the Valles Calchaquiés and the Hill of the seven colors before but I was overwhelmed seeing it myself.

Starting in Cafayate I take you on a journey to both regions and introduce you to the wineries of Cafayate where the Torrontés is produced, I explore the Quebrada de las Conchas with its rock formations, I visit the Hill of Seven colors in Purmamarca at the Quebrada de Humahuaca and I show you around in one of the most beautiful cities of Argentina: Salta.

Again I was able to fly the drone to give you a scale of these impressive landscapes and I got some really nice aerial footage of the red Canyons as well as the vineyards and Cafayate.

Beside all those sights in Salta & Jujuy I recommend you to try the local food. The empanadas, the locro, the humitas and tamales are the most typical food and so delicious!

This trip was executed in only a week by using the local buses and a well planned itinerary – following I list all the places I visited & Things to do in Salta and Jujuy:
– Cafayate & Fina Las Nubes vinery
– wine tasting of Torrontes
– Quebrada de las Conchas / Quebrada de Cafayate (part of the Valles Calchaquies)
– “Cerro de los Siete Colores” = Hill of the seven colors (part of the Quebrada de Humahuaca),
– Purmamarca & Paseo de los Colorados
– Old town of Salta
– la Criollita in Salta
– Cerro San Bernardo in Salta

===
My personal recommendations for Hotels & Hostels:

More info on Argentina’s Northwest – Things to do in Salta, Cafayate & Purmamarca