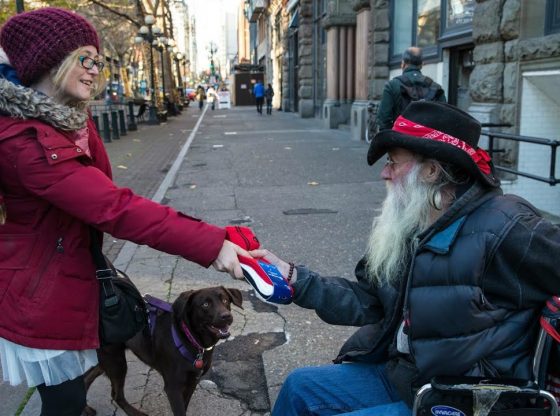 Unlike the majority of fake homeless experiment and social experiment videos popular on YouTube, this video featuring a homeless woman in Seattle is as real as real can be.

I have been trying to vlog more and I did my very best to capture the experience of meeting Manda for the first time, touring Seattle’s sanctioned homeless tent encampments, and handing out Hanes socks with Manda to homeless people downtown Seattle. Because capturing vlog content is often challenging some of the footage is not the greatest but I selected clips on emotion over quality. I feel it’s important to bring you through the experience as authentically as possible. This video is far from perfect but it is real!

A few months back Manda posted a selfie on one of my Facebook pages of her drinking coffee from her homeless camp. We became friends online yet I never imagined that I one day I would be at Manda’s camp drinking coffee with her.

This video starts off with the moment I met Manda in real life for the first time. Manda then takes us on a short tour of her homeless camp. I have huge respect for Manda. It takes a lot of courage to open up your life for the world to see when you live under a bridge homeless.

We then meet up with a friend that works for the City of Seattle who takes us on a tour of Tent City 5 Interbay that is run by homeless people Licton Springs Village, a low barrier tent community that is a harm reduction model.

The next day folks from Hanes flew out to Seattle to meet Manda and to give socks away to several of Seattle’s homeless camps, the Downtown Emergency Service Center (DESC), and homeless people unsheltered downtown.

If you want to connect to homeless people you need to listen to homeless people. Manda took control. She was a force of nature handing out socks and hard to keep up with. The passion Manda had to help other people was contagious.

This video is an inside look into Seattle’s homeless population and how homeless people survive. Throughout this video, Manda shows us why it feels good to give to others. Let’s follow her lead and do all we can to help the hurting people in our communities. Manda is living proof we can all make a real positive difference in our world!

If you’d like to help support Manda directly this is her GoFundMe page https://www.gofundme.com/4qcfk0o