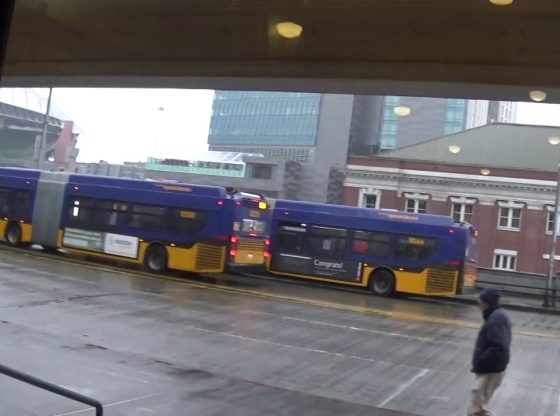 Union Station is a former train station in Seattle, Washington, United States, constructed between 1910 and 1911 to serve the Union Pacific Railroad and the Milwaukee Road. It was originally named Oregon and Washington Station, after a subsidiary line of the Union Pacific. Located at the corner of S. Jackson Street and 4th Avenue S. in the Pioneer Square neighborhood, the station opened on May 20, 1911.[1] The Milwaukee Road discontinued passenger service to Union Station 50 years later, on May 22, 1961, and the Union Pacific followed suit on April 30, 1971. With no passenger rail service serving Seattle from Union Station, the building remained largely empty. After nearly 30 years of sitting idle, the station finally experienced an expansive renovation supported by Nitze-Stagen with financial backing from Paul Allen. The Union Station renovation was the winner of the 2000 National Historic Preservation Award.[citation needed] It now serves as the headquarters of Sound Transit; its grand hall is rented out to the public for weddings and other events.

In Seattle, the term Union Station refers not only to the main station building, but also to the several adjacent office buildings at 505, 605, 625 and 705 5th Avenue South. Until 2011, Amazon.com was a major tenant of these properties,[2] all but one owned by Opus Northwest,[3] and the other by Vulcan.[4] The entire complex is earthquake-proofed by an underground ring of rubber.[5]

The International District / Chinatown station of the Downtown Seattle Transit Tunnel, opened in 1990 and served by buses of King County Metro and (since 2009) by Sound Transit’s Central Link light rail line, is located directly adjacent to Union Station, mostly below street level.