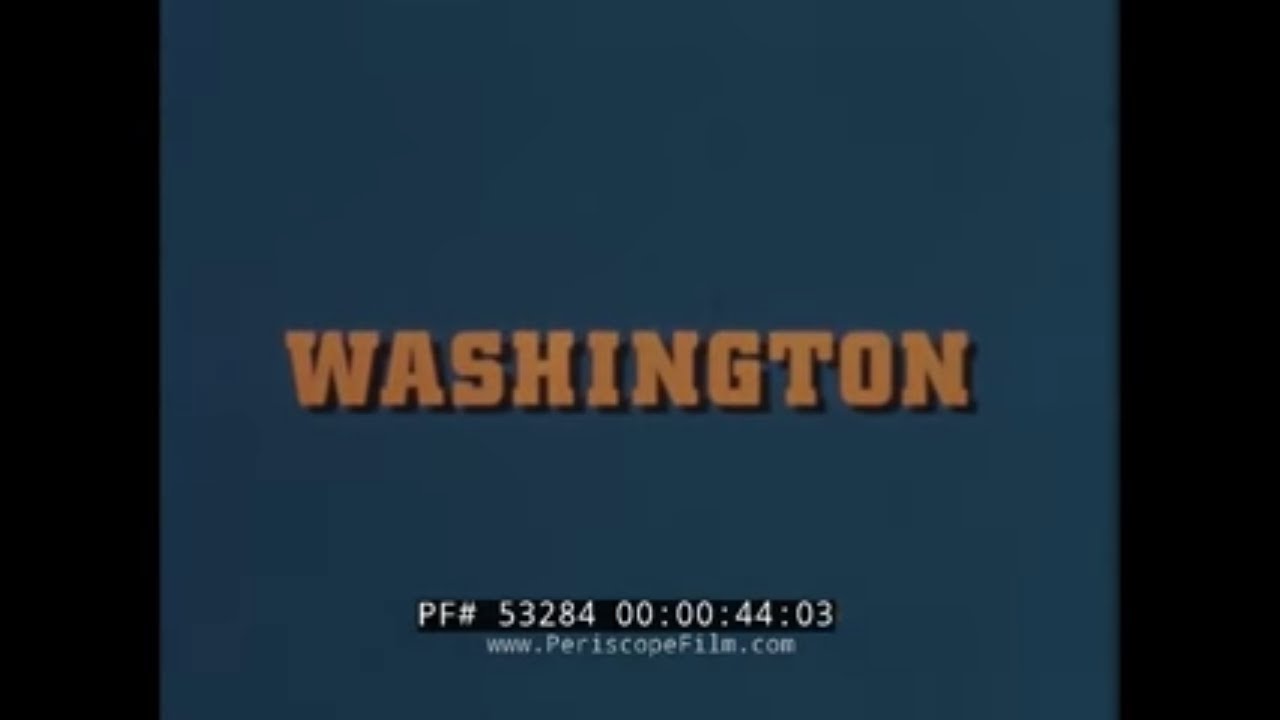 The Surprising State…Washington is a 1960s film on the industrial opportunities in the state of Washington, presented by Washington State Department of Commerce and Economic Development. The film opens with combines harvesting wheat, shots of fishing, other industries, and the scenic natural resources of the state, including Mount Reiner (00:57), coastlines, and waterfalls. Aerial footage shows the mighty Columbia River (01:46). The film takes viewers to Grand Cooley Dam (02:14), and it gives viewers an inside look at the dam’s river-propelled turbines. Footage shows a dam being built on the river (02:54). This is followed by shots of Lake Roosevelt and its canals (03:45), potatoes being harvested, and an apple orchard where people on ladders pick the fruit (04:30). Woman box apples as they move on a conveyer belt. Strawberries and cherries are sorted and inspected at a packing plant (05:11). Other agriculture industries featured in the film include livestock yards, dairy farms, and fields of wheat. Combines dump harvested grain into trucks. Washington peas are harvested by threshers (06:38). Women in a green pea processing plant inspect the peas before they are canned. A logger uses a power saw to cut down a massive Douglas fir (07:47). Men make composite wood boards using wood chips (08:28). A band saw cuts boards from a large log. Paper rolls come off the production line at a paper mill (09:55). A tramway carries magnesite ore away from the mine (10:18). Lead zinc is moved to surface from mine on conveyer belts. The film also shows an oil refinery (11:34) and a uranium mine (12:10). A massive aluminum plant calls Washington home (12:30). Ingots of molten aluminum are poured, which, once cooled, are flattened in a machine and turned into100-foot sheets. Some ingots are made into wire. Men use steel beams to build bridges (14:03). People ride a ferry across Puget Sound (14:36). Cargo is loaded onto shipping barges at Seattle’s harbor. A barge carries wheat along the Columbia River. Trucks drive on the state highway system (15:56). The film shows viewers the campuses of some of the state’s universities (16:15). Researchers work in a Washington State hydraulics lab (16:46). A man looks at a geophysical dome. At the Hanford Operations Office in the Columbia Basin, people conduct research (18:00). A scientist uses manipulators to work with atomic materials. Construction in Seattle’s downtown is a testament to the city’s growth (19:08). People build ships in shipyards (19:44). The state offers endless possibilities for outdoor recreation, including hiking in the mountains (20:11), fishing the rivers and out at sea, and boating through the locks fro the sound to Lake Washington. Members of a Northwest Pacific tribe dance in traditional dress (20:48). The film concludes with more shots of Washington’s rivers, mountains, and landscapes.