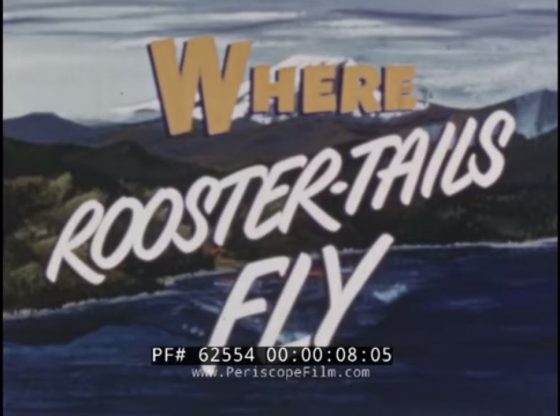 Where Rooster-Tails Fly is a short film, produced by Charles R. Perryman, that shows viewers highlights from Seattle’s 1952 Seafair festival, including the Torchlight Parade, Samish Slough Race, and the 45th Gold Cup (a hydroplane boat race later called the Seafair Cup then the Albert Lee Appliance Cup). The film opens with a boat on fire in Puget Sound (00:49), where men dressed as pirates watch from nearby boats. Aerial views of Seattle, Lake Washington, and Puget Sound show viewers the host of the Seafair festival. Sail boats cruise on Puget Sound (01:49) and Lake Washington. Native Americans move canoes into the water (02:09). Some stand on shore and observe the canoe racing between the tribes, including the Samish and Puyallup. Men from the University of Washington row crew on Lake Washington (03:30). Other men participate in a small outboard motor boat race (03:59). In the annual Samish Slough Race, people race small boats on the small slough (04:27); several boats get stuck on shore or capsize while navigating the course. The crew of Seattle’s SLO-MO-SHUN prepare for a speed trial (06:17). Men put on crash helmets and life jackets. Stanley Sayres pilots the speed boat. Officials test their timing equipment. Footage shows the boat ripping across the surface of the mile stretch on Lake Washington. Footage shows Gold Cup competitors from Detroit and Los Angeles hauling their hydroplane boats up to Seattle for the race. People participate in log races, predicting the exact time of arrival at locations while cruising at a fixed speed (09:59). A yacht pulls into the Ballard Locks (10:23). The festival’s King Neptune and Queen of the Seas (Iris Adams) pose for the crowd. They ride a float in the Torchlight Parade, which features other floats, clowns, and a dragon led by a Chinese dancer (12:38). Women perform synchronized swimming while several men perform in a high dive comedy act. At Lake Samish, men and women put on water skis. The skiers make a human pyramid. One man is pulled on a saucer. Footage shows skiers going off jumps. A technical crew prepares Lake Washington for the Gold Cup (16:40). Boats show up for the race. A mechanic works on a speed boat. The film shows an aerial view of Lake Washington just before the race. Tens of thousands of people crowd the shores to watch the race. The boats competing in the race arrive: Hurricane IV, Great Lakes II, Miss Pepsi, and Such Crust IV. Hurricane IV is lowered into the water (18:58), followed by Miss Pepsi. The drivers climb into their boats and head out for the start of the race (21:00). The race begins and the boats race around the lake. Drivers face rooster-tail spray from lead boats. Toward the end of the race, only SLO-MO-SHUN and Hurricane IV remain (23:21). Hurricane IV breaks down, and only SLO-MO-SHUN is left, and she pushes through the final turn (24:38) and wins the race. The team’s lead mechanic is thrown into the lake by the pit crew. The film concludes with highlights the various boats and races that make up the Seafair festival and the Gold Cup Race.